We often hear the bigger roots, the bigger fruits. Or: As above – Is below.

When growing cannabis, one of the frequent debates is how to achieve this…

And with that, the transplanting discussion quickly turned into a challenge, and many of us continue to agree to disagree.  I decided to put this argument to this test and see if a large pot is necessary. Fully curious what the difference in yield, and plant health would be and, and if so – by how much if grown in smaller, transplanted up or not… all starting with clones grown under the same conditions with the one difference being the transplanting!

These 3 clones started from a known mom, cut on the same day, and using only fresh aloe as rooting hormone, then promptly placed in a solo-cup and then transplanted at 3 weeks old, and were all given a full weeks recovery from transplant before going into  flower – #3 was transplanted once more into a 5 gallon and given an extra week of veg to recover (and one less week of flower time so the experiment ended with all the same age).  Grown all natural, no HST, no LST… challenge on!

Pic 1- Let me introduce the ladies:

#3 went from solo cup to 2 gallon, then into a 5 gallon fabric pot (front)

I’m using an app called “Bud” to track this grow

Now I get #3 looks small, although she is the same age – she was left in veg for one extra week compared to #1 & #2, as she had an extra transplant and got a week to recover.

More lights on/lights off… no HST, no LST is actually quite hard!

So Just over a month into flower, #2 the 5 gallon is showing more deficiencies vs #1 the 2 gallon! Not surprised that #3 is doing great in her new pot, having now mostly caught up.

And now #1 in her 2 gallon has caught up to #2 in her 5 gallon on being deficient,  #3 the transplanted is doing great!  This is NOT what I expected! How is #1 is doing so well?

Here are the pre-harvest results:

#1 in her 2 gallon on the left, #2 in her 5 gallon in the middle, and the clear winner IMHO at this stage #3 the transplanted. #1 and #2 did stress anther, so some seeds did happen. #3 did not stress nor late stage anther- she is happy & healthy and produced no seeds. #2 and #3 visually are a close contest in yield. Now to cut and hang… then weigh in. 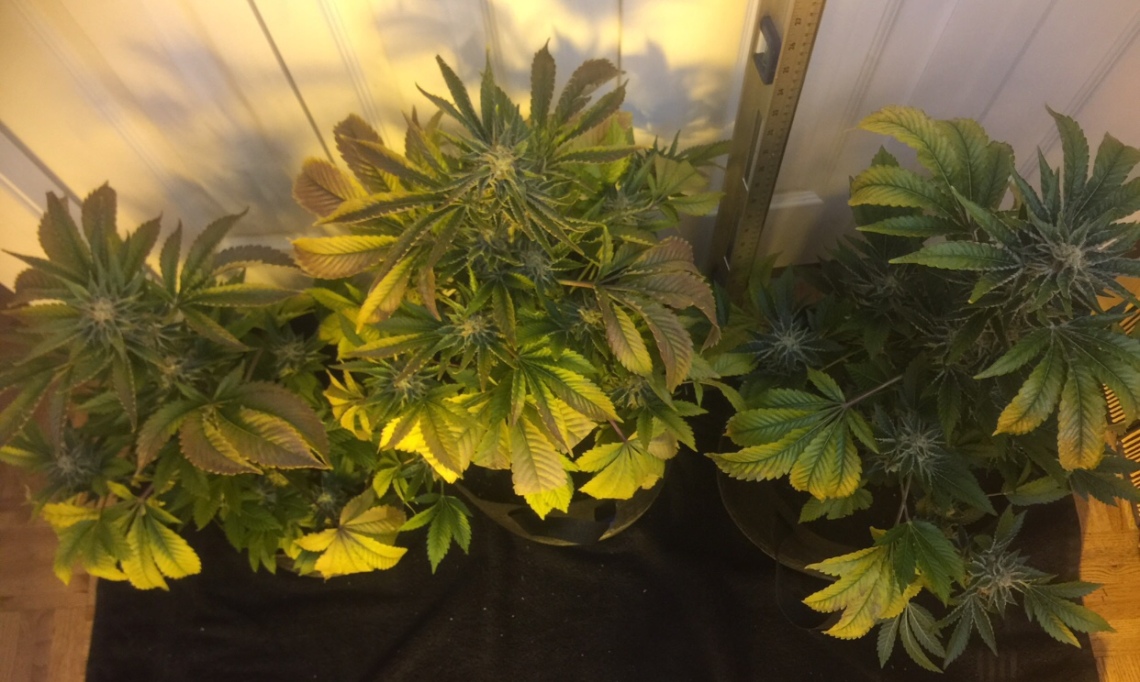 Tearing apart the root balls to see what was going on – as the differences between the two 5 gallon plants was significant – curious what is below as I know how above played out. I’ve often talked about transplanting and rootball logic – now is my chance to really compare! 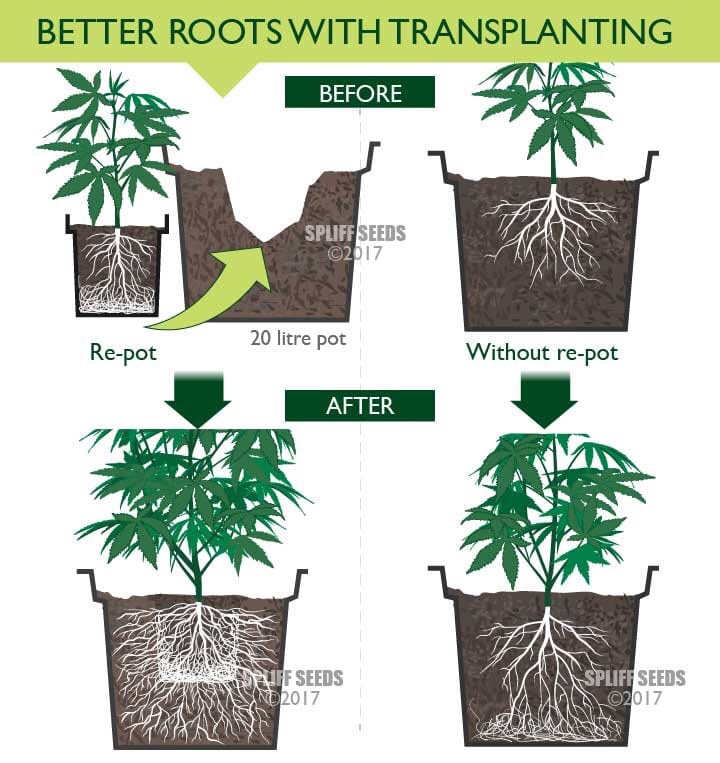 #2 fell out, the other two took some work with roots holding the dirt. With some gentle shaking to work the dirt loose…

#1 was a serious challenge to un-pot (and I have technique – banging it to loosen and then rolling the pot off like a stocking), she used all the soil she was given and filled it with tight roots holding it all together – many roots air-pruned by the fabric pot on both the sides and bottom.

#2 in the middle kind of fell out of her pot crumbling with not much root strength holding her root ball together – she did make an attempt to grow beyond her pot but only on the bottom, not the sides.

#3 was another serious challenge to un-pot. She filled all her soil with various size roots that held her root ball together, sadly much of these were smaller and did not survive me shaking the dirt off.  She had roots air pruned on both the sides & the bottom of her fabric pot. 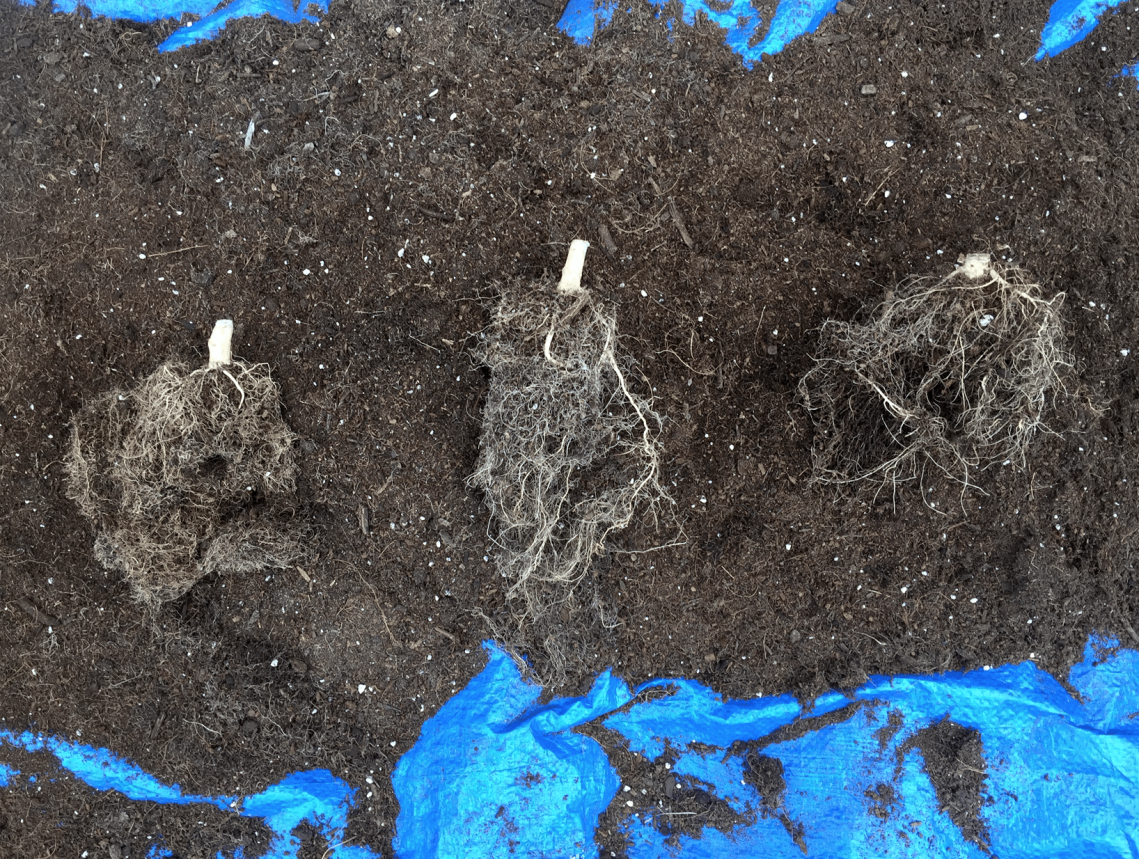 This explains a LOT!!! while #1 did get root bound, it did well within its confines having been given no room to expand.  #2 had imho no excuse to be so wispy and deficient in how it grew considering on how much space it had verses what it used. #3 shows its initial 2 gal rootball size, yet also expanded growing roots both out the sides and bottom of the pot using all its soil.

Transplanting can create a larger stronger rootball and an overall healthier plant.

If deciding to not transplant, use the biggest deepest pot you can.

A larger pot at the start does not always equal larger yield nor larger roots in the end.

View all posts by Storm